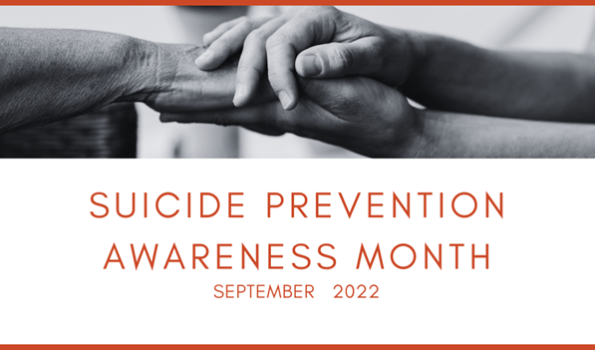 The month of September is dedicated to bringing awareness to Suicide Prevention. During this time, community members, behavioral health advocates, organizations, survivors and allies join in unity to promote suicide prevention awareness. Additionally, September 4th - 10th commemorates National Suicide Prevention Week, a time where stories and resources are shared to promote suicide awareness. Then to end National Suicide prevention week, World Suicide Prevention Day on September 10 remembers those who have been impact by suicide and works towards efforts on how treatment can be directed to those who need it the most.1

To understand the importance of recognizing a month such as this, it is important to understand the numbers. The National Institute of Mental Health (NIMH) states that suicide is a public health emergency as it is one of the leading causes of death in the United States. NIMH reports that according to the Center for Disease Control (CDC), suicide claimed the lives of over 45,000 people in the year 2020.2 Additionally, reports also show that suicide is the leading cause of death in individuals between the ages of 10-14 and 25-34 with individuals between ages 15-24 and 35-44 following as the third and fourth leading cause of death respectively.2  In 2020, a higher rate of suicide was found in males compared to females when broken down by race. Within race/ethnicity, a higher rate was found in American Indian individuals compared to their counterparts.2

Suicide prevention should always be a yearlong effort. However, behavioral health advocates, allies, and community members can engage in Suicide Prevention Awareness Month through the downloading and sharing of Mental Health information and resources on social media while participating in events within their communities. It is important to also note that in response to a report released in by the Federal Communications Commission - in consultation with SAMHSA the Department of Veterans Affairs, and the North American Numbering Council - as of July 16th, 2022, all suicide crisis calls and texts messages can now be routed through an easy to remember “988” number.3 While there is still much work to be done in suicide prevention, this is the step in the right direction towards efforts in decreasing suicide rates.

As preventionists, it is important to understand suicide prevention must be met with a comprehensive approach. According to the Suicide Prevention Research Center, suicide prevention requires a combination of efforts that work together to address different parts of the problem.4 The model includes nine strategies such as:

More information on the model can be found here or on the Central East PTTC site, here