The Culture of Prevention

Reflecting on the concept “Culture of Prevention” within the context of the COVID 19 pandemic takes on a more emergent and relevant significance.  At what cost in human lives has the failure to have a universal ‘culture of prevention’ in place!  This represents a clash between science, economics, politics, and, ‘living’.  Yet there needs to be a synergy across these domains for a ‘culture of prevention’ to be established and then survive. And while we seek necessary medical and pharmacologic solutions to address the pandemic, we are employing behavioral strategies—wearing masks and social distancing—to protect ourselves until biological preventives become available.  A review of the literature on the responses to and lessons learned with regards to the H1N1 and H5N1 epidemics (e.g., American College of Physicians et al., 2006; Fineberg, 2014) lays out a planning process to assess and respond to the growing infections.  If nothing else, these experiences underscore the need for a universal embrace of a ‘culture of prevention’.

But what does that mean? What is a “culture of prevention”?
Salminen and Lee (2014) in their review of the literature seeking a definition of ‘culture of prevention’ concluded that there “is no generally accepted definition of this concept” and as the concept has not been operationalized that it is not a “scientific concept” but is more ‘an umbrella concept for improvement measures’. However, The Association of Southeast Asian Nations in 2017 in its Declaration on Culture of Prevention for a Peaceful, Inclusive, Resilient, Healthy and Harmonious Society stated that promotion of a culture of prevention focused on:

It also suggested that the ‘culture of prevention’ needs to be supported by ‘a) a supportive policy and legal framework, b) scientific evidence and research, c) coordination of multiple sectors and levels …involved, d) training of policymakers and practitioner, and e) commitment to provide adequate resources to sustain the system in the long term’.   But the construct of a ‘culture of prevention’ and the operationalization of the construct remains to be developed.

Let’s explore the foundation of this concept as it pertains to substance use and other risky health behaviors.  It is an understanding of the etiology or ‘cause’ of the problem and that there are effective responses to address or mediate the potential negative trajectories in the case of vulnerability or to reinforce positive actions that are anticipated to lead to positive outcomes. It is a belief that prevention “works”, a belief that is so strong that efforts are made to support prevention efforts in a variety of settings and around a variety of issues.

However, as we learn from the literature, a belief in the competency to engage successfully in these preventive health behaviors is important as well as having these beliefs reinforced by the ecological context at the micro- and macro-levels (Kasl & Cobb, 1966; Kegeles et al., 1965). These elements are outlined in the Health Belief Model (Rosenstock, 1974) and the Theory of Planned Behavior (Ajzen & Fishbein, 2005).  The model below merges the components of these two theories within the contexts of our micro-level (families, schools, peers, faith-based organizations, workplace) and macro-level (communities, states, nations) environments.  If these models are close to accurate in predicting behavior, what factors then house the concept ‘culture of prevention’? 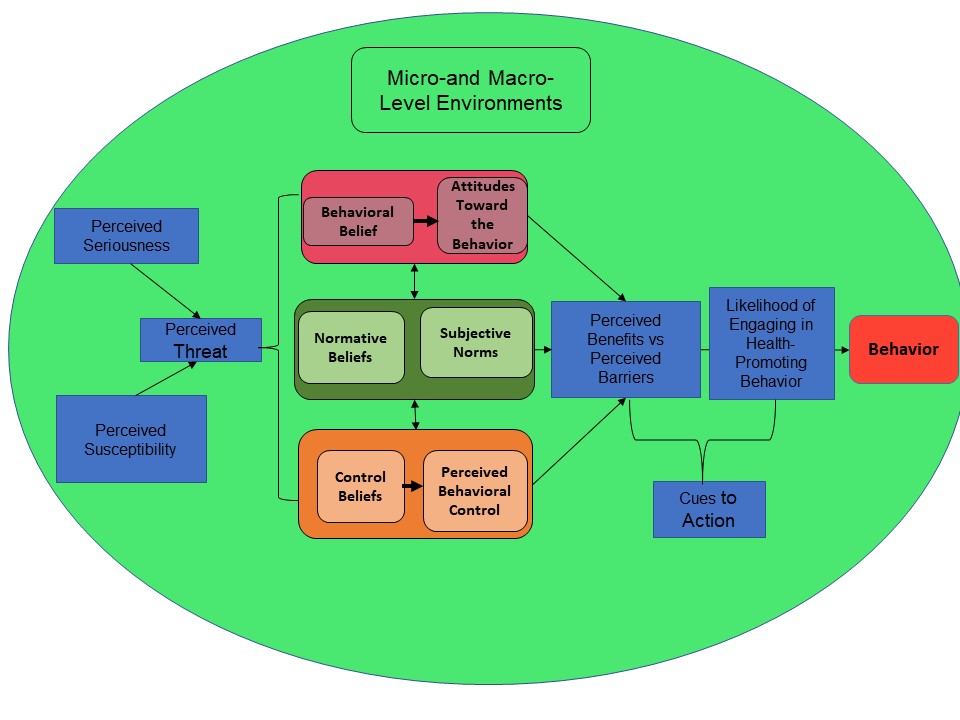 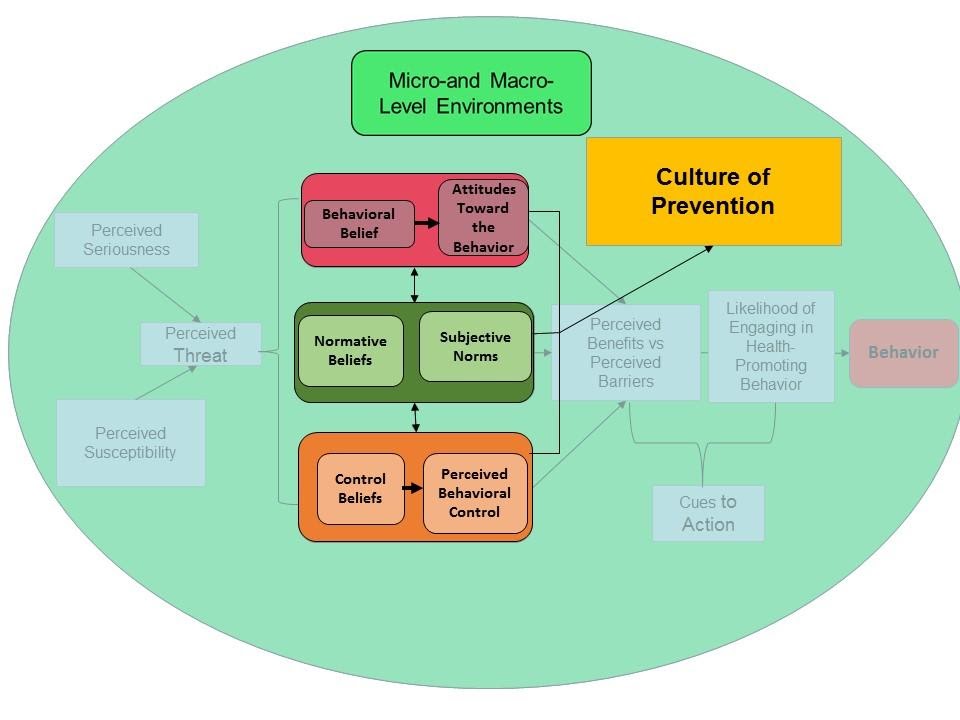 FIGURE 2: THE CULTURE OF PREVENTION

It is suggested that the culture of prevention is represented by the core of Figure 1, the behavioral beliefs and attitudes that are held about the health behavior, the perceived normative beliefs and subjective norms regarding the health behavior, and not only having the competencies and skills to perform the health behavior but also the confidence that one can perform it.  These are shaped very much by the micro- and macro-level environments. Although one can argue that these theories and their constructs pertain primarily to individuals, it is the embrace of these components by populations as a whole, that establishes a ‘culture’.

A major impediment to the embrace of a culture of prevention not only at the governmental level but also among public health and prevention professionals and the public has been the lack of science to provide the strong normative support to engage in prevention strategies, for having the appropriate skills to perform prevention behaviors, and, most challenging of all, beliefs in the efficacy of prevention strategies. Outside of the great successes of the vaccination programs for many infectious diseases, the behavioral field of prevention has been most successful with reducing smoking in many countries. There are important principles that arise from the tobacco experience of great interest to this issue.   First were the many research studies that found an association between smoking and health problems including the groundbreaking studies that demonstrated the involuntary effects of smoking on nonsmokers— ‘second-hand smoke’ (Hirayama, 1980).  These studies were replicated across cultures and geographic boundaries (Wynder & Graham, 1950; Doll & Hill, 1950; 1986 Surgeon General’s Report on the Health Consequences of Involuntary Smoking).  Second was the importance of having national acknowledgement of the association of smoking on health and having a significant’ health leader, the U.S. Surgeon General, giving this issue a lot of official attention (National Academy of Science, 2007). Third, effective interventions needed to be available and ready for implementation (Holder et al., 2000; Jacobson & Wasserman, 1997). Furthermore, multiple interventions were put into place; not only policies and communications, but also other types of behavioral interventions such as smoking cessation programs and school-based curricula (Hopkins et al., 2001). In addition, efforts were made to combine prevention AND treatment in an array of services.  And, finally, these interventions had to be sustained over time and their impact monitored by several agencies including the Surgeon General’s Office, the Center for Disease Control and Prevention, and the Food and Drug Administration.

The great challenge is to ensure that a culture of prevention permeates everyday life and transfers from generation to generation while at the same time has the ability to integrate new science-based information that not only informs the prevention workforce but also the public.  Such a venture requires the incorporation of an organizational structure and system of services at all levels of government.  Such a system is suggested in the United Nations Office on Drugs and Crime and the World Health Organization’s International Standards on Drug Use Prevention (2013; 2018) with key components of: a supportive policy and legal framework; reliant on scientific evidence and research; has the ability to coordinate multiple sectors and levels (national, sub-national and municipal/ local) ; includes a system to train and credential policy makers and practitioners; and, is committed to provide adequate resources and to sustain the system in the long term (UNODC/WHO, 2018; pp. 50-59).

Conclusion
Like having a universally accepted definition of prevention, having a universally accepted definition of a culture of prevention is important for setting a context for the support of prevention behaviors and for prevention programming that instills the beliefs that these behaviors will result in positive outcomes, reinforces attitudes in support of these behaviors, and, enables the performance of the behaviors with ease.  Such a context must be universally affirmed and embraced with suitable governmental structures for support.  The advances in our understanding of the etiology of risky health behaviors and in our ability to intervene to change them when they occur and to reinforce positive behaviors sets the foundation for next steps.

National Academy of Science (2007). Ending the Tobacco Problem: A Blueprint for the Nation. Available at:
http://www.nap.edu/catalog/11795.html.